LUCI2 and Pathfinder see the sky for the first time!

A few weeks after LUCI2 met LUCI1 on the telescope and quite a few closed-dome (I should write enclosure) tests, it was time for the second of our near infrared imagers and spectrographs to see first light. Six days of commissioning and a reasonable weather made for a very successful run. 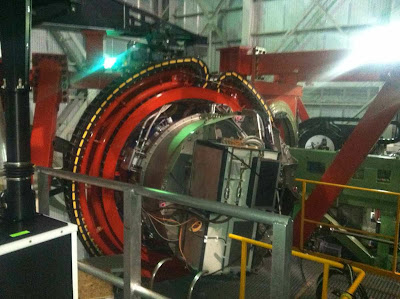 Luci2 on its derotator at the front bent focus of the right side of LBT.

If LUCI2 is mostly a twin of LUCI1, it comes with a brand new software which was checked, improved and optimized in real observing conditions. The usual commissioning observations to characterize the instrument on sky (astrometric and photometric tests in imaging mode, spectrophotometric zero-point determination for grating 200H+K, ...) were carried successfully. As the new software can handle both LUCI2 and LUCI1, an imaging script in binocular mode was sent and correctly executed. All on-sky tasks foreseen for this run have been successfully performed and the basic functionality and performance of the instrument could be demonstrated.

Two more runs scheduled in December and January should conclude the first phase of the LUCI2 commissioning in seeing-limited mode.

Pathfinder is an effort to bring a substantial portion of the LINC-NIRVANA instrument to the telescope in advance. Specifically, one Ground-Layer Wavefront Sensor (GWS) and its associated drive electronics and software are implemented at the right, rear, bent focus of the LBT. The main goal is to demonstrate ground layer correction of turbulence, as well as establish the needed infrastructure for telescope and adaptive secondary communications. It will also allow the team to perfect the techniques of star acquisition and tracking. Working on the instrument at the rear bent focus of the right side of the LBT. The middle focus station is LBTI and the front is LUCI2 (on the right of the picture).

Three nights following the LUCI2 commissioning run were scheduled for Pathfinder and LBT engineering. Weather has been unfortunately poor, but Pathfinder was lucky enough to have a couple of openings in the clouds sufficient to catch a couple of bright stars! In spite of a 2.3" seeing, loop was closed with 50 Zernike modes on Epsilon Auriga

There is still a long way to go - this was, after all, only a single star on axis. It is however an important step for the whole team, which left Mt Graham very tired, but happy! In coming campaigns, Pathfinder will be operated with multiple stars in ground-layer adaptive optics mode.

Posted by the LBTO broadcaster at 5:14 PM