Observatory status in the aftermath of the Frye Fire


Last night was a mix of AO work and LUCI-AO testing in closed dome. Actually, LBTO has no dome, strictly speaking. It should be referred to as "the enclosure", which is, I guess, better than "the box" (though it really looks like a box!)

Today was very similar to yesterday: Nice weather, no fire close-by, but smoke from the south further away for most of the day.

Here is our daily excerpt from Eric Buckley's report:

Today remains a no travel day.  There is no plan for aerial firing, hand firing and mop up with snags along the road or threatening any of the structures continue.  Anticipated humidity levels down lower 10-15%, higher 20-25%.  Levels have been increased around Turkey Flat with the anticipated burn.  Yesterday the heavy air tankers dropped 180,000 gallons.  Winds are expected to ground the aircraft again this afternoon.  There are still several places with active fire from going west and south.  Contingency plans are being made ahead of the fires movement.  Dozer lines are being made.  So far, the use of our power line corridor as a dozer line is still shown as a proposal.  Use of SR 266 to the south, Taylor Pass on the west.

Until the fire crews cease setting back burns that have potential to harm the power line infrastructure, the commercial power will remain off. So, we are still running on generator and continue to maintain the facility in low power consumption mode, which excludes running the telescope. We are still waiting for a truck to bring fuel and start replenishing the generator tank. Hopefully for a better ending than "En attendant Godot".

Tonight will be more AO and LUCI-AO work (in closed dome, I mean enclosure!)

For a change, below is a panorama from the roof toward the west, with a somewhat pink SMT and a mostly white VATT and its shiny dome. No fire, no smoke ;)

Today was a smoky day at the observatory, though very quiet fire-wise at the site itself. The wind changed direction in the late morning, bringing smoke to MGIO.

You can see a  Video of the Frye Fire progress - June 12 to June 28, made at LBTO showing the IR maps made available by NIROPS (one image a day taken around midnight). Remember that the fire started on June 7, but was imaged by NIROPS starting only on the night of June 12.


The fire is at 39,051 acres with 825 people assigned. It is 43% contained. It has now been three weeks since lightning ignited this fire.
Today is a no-travel day as the fire fighters are actively setting back fires to suppress the advances toward the Turkey Flat cabins and to some extent Angles Orchard.
Fire is still active in the Riggs Lake and Snow Flat areas of the mountain.
Heliograph Peak is not under any threat at this time.
Yesterday’s weather was relatively calm but winds did kick up last night until around 2:45 am. This activity drove the fire further toward the Turkey Flat area.
SR 366 is going to be very busy today and most likely tomorrow with fire fighters as they try to keep the fire from jumping over this road.

A crew of 4 made it to the mountain this morning, leaving base camp at 03:30  and relieving Bruce and Jay.  In addition to Pat, Rick H., and Jared , Geno (telescope operator) is also on site in case we can resume night time operation,.

We are still running on generator. The fuel truck could not make it up today (too short a time window). It is ready to go as soon as there is an opportunity with 2000 gallons of fuel. Meanwhile, if we continue in low consumption mode, we should be good up to early next week. Tonight will be closed-dome AO work (if possible without activating the telescope hydrostatic bearing, which we don't want to switch on as they are consuming too much power...) for part of the night, followed by work on active flexure compensation for LUCI-AO commissioning.

The Forest Service held a public meeting this evening in Safford. You can find a video here:
https://www.facebook.com/CoronadoNF/videos/1227991943976087/

Note that the USFS will be using MGIO as one of their contingency safe zones.

These past two days have been quiet at the LBT site. Though the observatory did not suffer any damage from the Frye Fire, thanks to the great work of the fire crews, we are not back to operation due to not enough staffing, lack of commercial power, warm telescope and instrumentation, and a hazy and smoky environment.

The fire is at 38,500 acres with 813 people assigned. It is 43% contained. The site remains secure at this time. Crews will continue to patrol for spot fires as they spring up all over the mountain. Normal for a fire of this size and complexity.
The fire continues to burn south and east of the telescope site. It is affecting travel on SR 366 from the forest boundary up to the Noon Creek area and again from the Snow Flat area up to Fort Grant Vista point. This burning is causing sudden roll-aways of burning material to break loose and run down the steep slopes ending up in the roadway. This is one of the reasons they want to restrict travel.
They are preparing to light back burns in the Turkey Flat area to suppress that portion of the fires advance toward the cabins. Any time the Forest Service lights back burns, they automatically restrict non-fire personnel movement for safety reasons.

The observatory still runs on generator power, with enough fuel left in our tank for 4 to 5 days. We hope for a fuel delivery toward the end of the week. A water was able to come to the site to deliver 5000 gallons of water. We have a skeleton crew of 2 (Bruce and Jay). A crew change should happen tomorrow (starting from base camp at 3:30 am to be out of the mountain by 6:30 am to be out of the way of the controlled burns at Turkey Flat), bringing hopefully a somewhat larger crew (4).

The vent doors were left open in the very early morning for a few hours to cool the enclosure, which has been at more than 20C for some time as we did not open it for the past 10 nights... The DX Adaptive Secondary Mirror has been restarted and looks happy.

The weather forecast calls for higher winds and dry conditions.

James and Mike W. left the mountain yesterday morning. Below are a few pictures taken by James on the way back to base camp. (Credit: LBTO/J. Riedl)

Around the observatory (June 26) 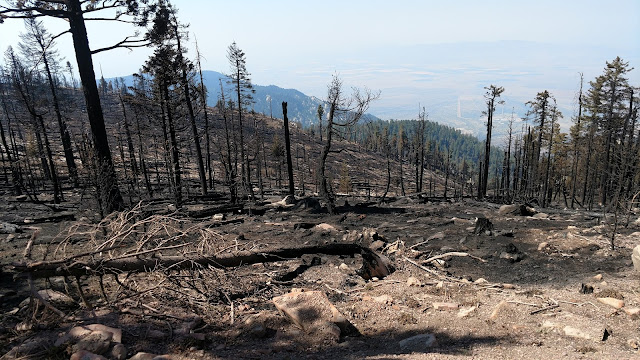 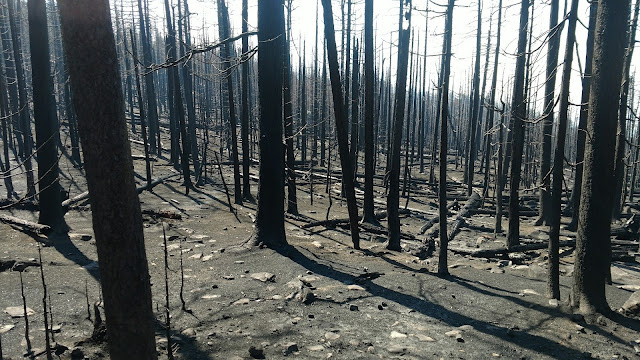