The lasers of the ARGOS Ground Layer Adaptive Optics (GLAO) system were propagated from the two sides of the LBTO telescope for the first time on November 5, 2013. See the previous post on this topic for more information.

Slightly more than one year later, at the end of November 2014, the LBTO adaptive optics was locked on the three laser guide stars of the ARGOS constellation on the right side of the telescope, achieving an impressively good correction on the whole field of LUCI2. 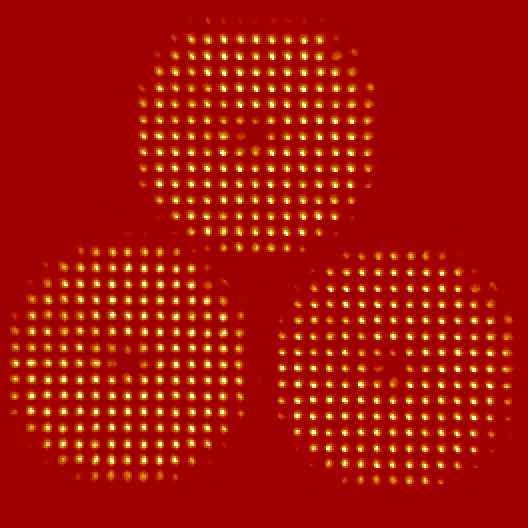 This animation blinks between a pair of uncorrected and ARGOS-corrected images
of NGC 2419 (~3.6'x3.6') with LUCI2

This is a very important step in the development of ARGOS, auguring well for the final performance of the LUCI1-LUCI2-ARGOS combination!

There is still much work to be done with ARGOS: fine-tuning and streamlining operations in the first half of 2015, installing the left side wave front sensors on the telescope in the summer of 2015, and commissioning them in the last months of 2015. The whole system will then be integrated to the observing environment and extensively tested in binocular mode, with a release to science currently envisioned for mid-2016.

Kudos to the whole ARGOS team and many thanks to the LBTO staff and the laser spotters for a great support!

More information on the ARGOS project is available here.
Posted by the LBTO broadcaster at 5:36 PM No comments:

Shutdown is over. Restarting the observatory...

Every summer, during monsoon season, the observatory is shutting down to perform a mix of maintenance tasks and improvement/development work which all require the telescope to be inoperative for an extended period of time, therefore precluding any observation.With short nights and the weather in average much worse than during the rest of the year, July/August is the preferred time.

The 2014 shutdown lasted from July 9 to August 29 and the observatory is now in restarting mode for a couple of weeks. Science will start again on September 17 (see the 14B schedule here).

On the long list of things to do during shutdown, taking care of our two primary mirrors remains a big endeavor. Every year, we realuminize one of them and wash the other. As there are no mirror covers (yet), the main mirrors are more exposed to an environment which is not very forgiving (moths, pollen, dust, ...) than at other observatories. This year, the right mirror (DX) got a new coating and the left (SX) went through a good cleaning.

The realuminizing  went went very smoothly and the coating on DX is one of the best so far. SX is clean and shiny. As the moth population is smaller than usual this summer, both should stay clean for quite some time. You can see pictures of other phases of the realuminizing process here (2013 shutdown).

Much work has been done on various subsystems of the telescope. To cite only a few: improvement of mirror ventilation and instrument cooling system, installation of new oil catchment, roof sealing, addition of flexible vacuum lines for LINC NIRVANA, maintenance and improvement of AGW (Acquisition, Guiding, and Wavefront sensing units) #1 and #2, including the addition of a tip-tilt sensor for ARGOS on AGW2 (right side),  ...

On the instrument side, the LBCs went through their annual maintenance. LUCI1, which had been unavailable due to various issues for a good part of last semester, was brought back to life and the tests so far have not shown any problem. Work on PEPSI by the IAP team continued and we should be able to announce soon the first light from the VATT through an optical fiber laid underground between the two observatories. Stay tuned!

A last note: The shutdown started with a couple of heavy hailfalls, which resulted in hail clogging the water drains, immediately followed by heavy rains and water finding its way through the door seals on top of the enclosure, ending on the telescope. Damage was limited, but unfortunately, the oil used for the hydrostatic bearings on which the mount rides (both in azimuth and elevation) was contaminated by water. So, instead of moving right away to the usual shutdown activities, some of our staff had to take care of purging the whole oil system, cleaning up before replenishing it with fresh oil. Fortunately, we were able to clean the contaminated oil at base camp and to use it again.

The source of the flooding has been identified and corrective action will be taken as soon as possible.

Posted by the LBTO broadcaster at 7:22 PM No comments: 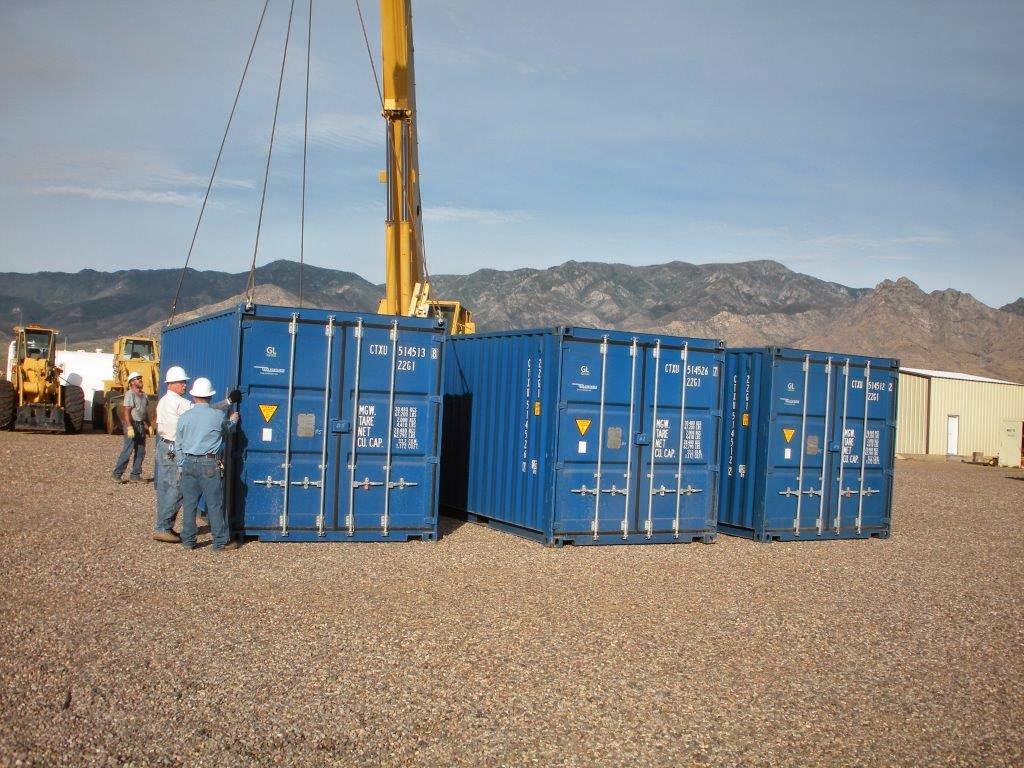 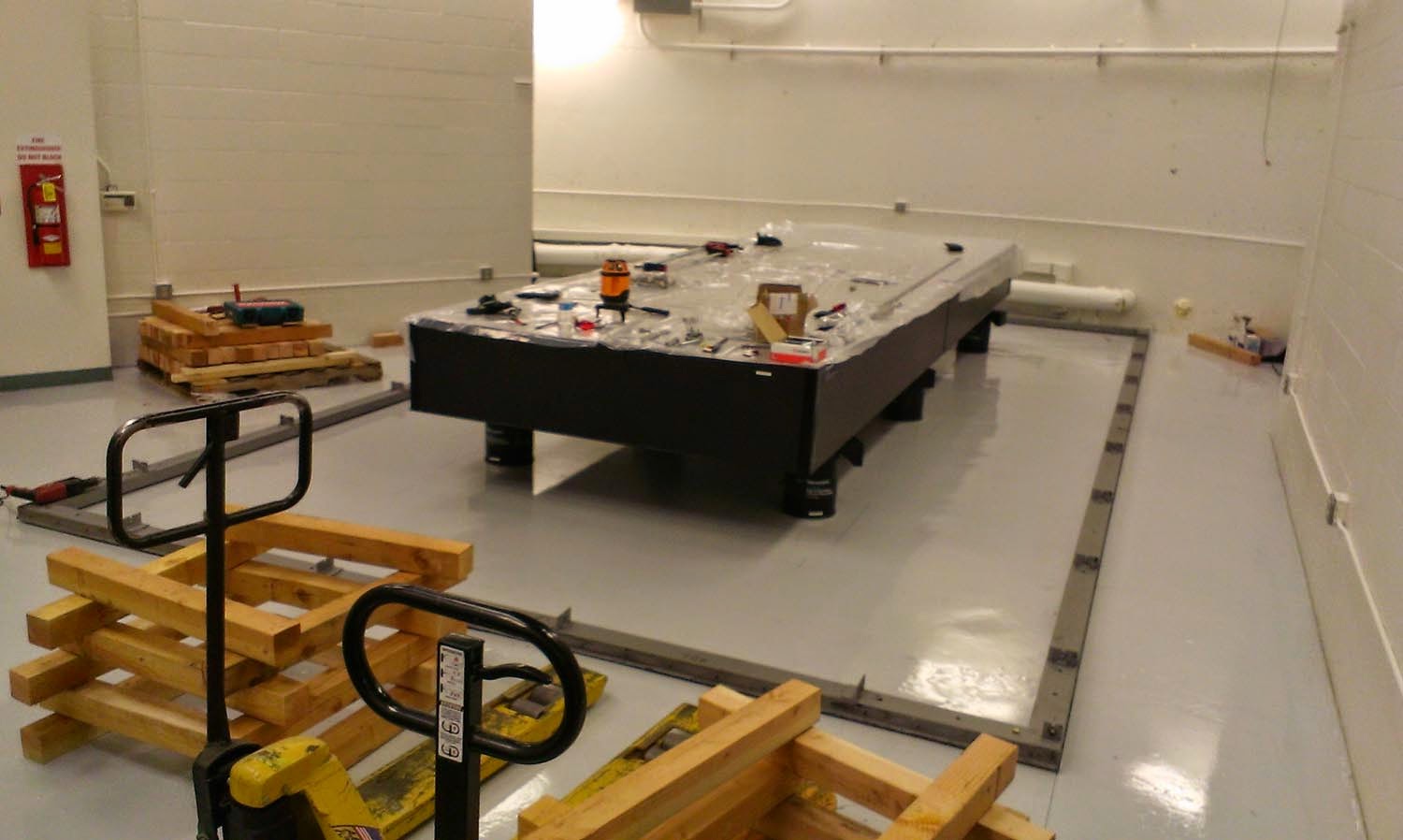 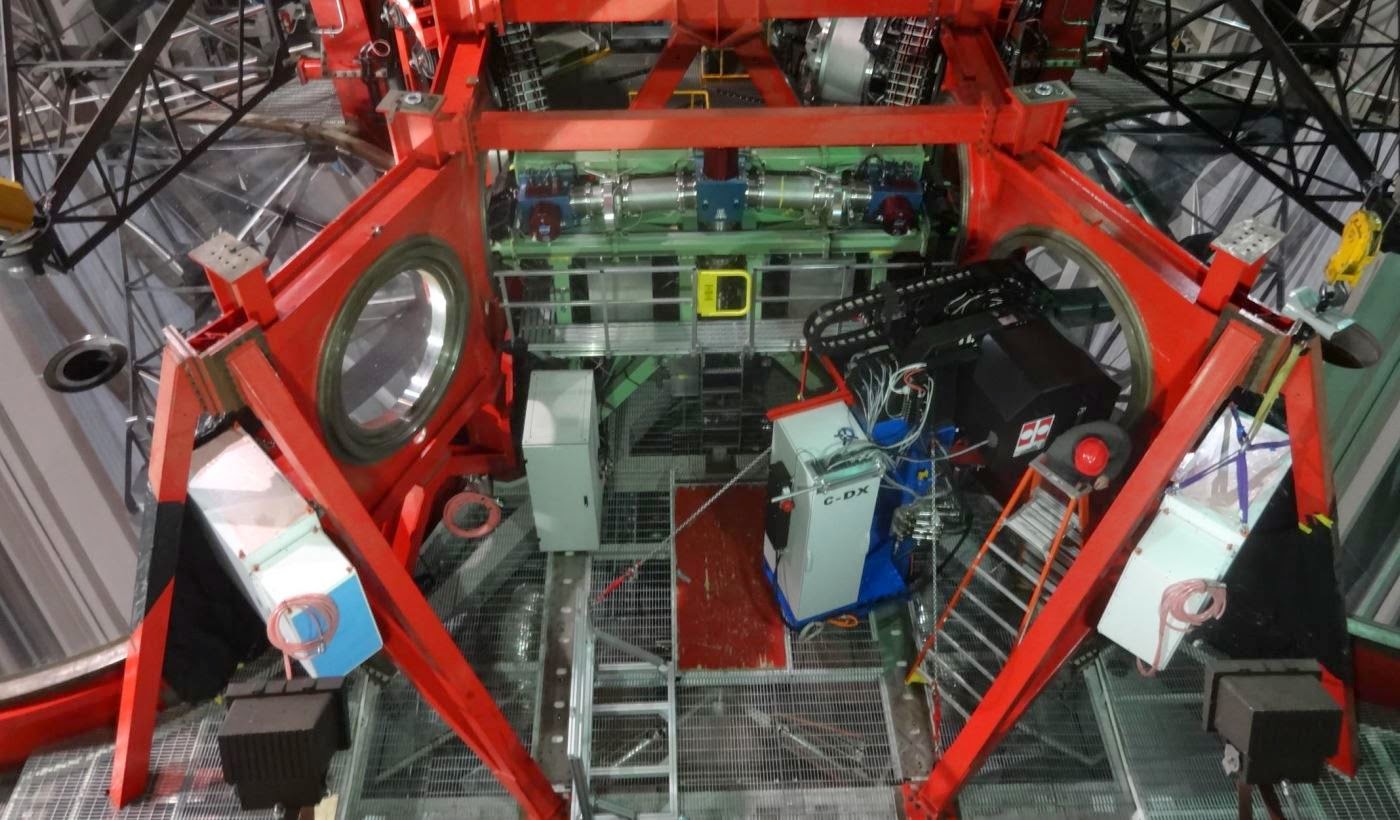 Email ThisBlogThis!Share to TwitterShare to FacebookShare to Pinterest
Labels: PEPSI

With the installation of MODS2, all facility instruments are now on the telescope!

At the Large Binocular Telescope Observatory, the instruments for general use by the the members of the LBT community, so-called "facility instruments", come in pairs. 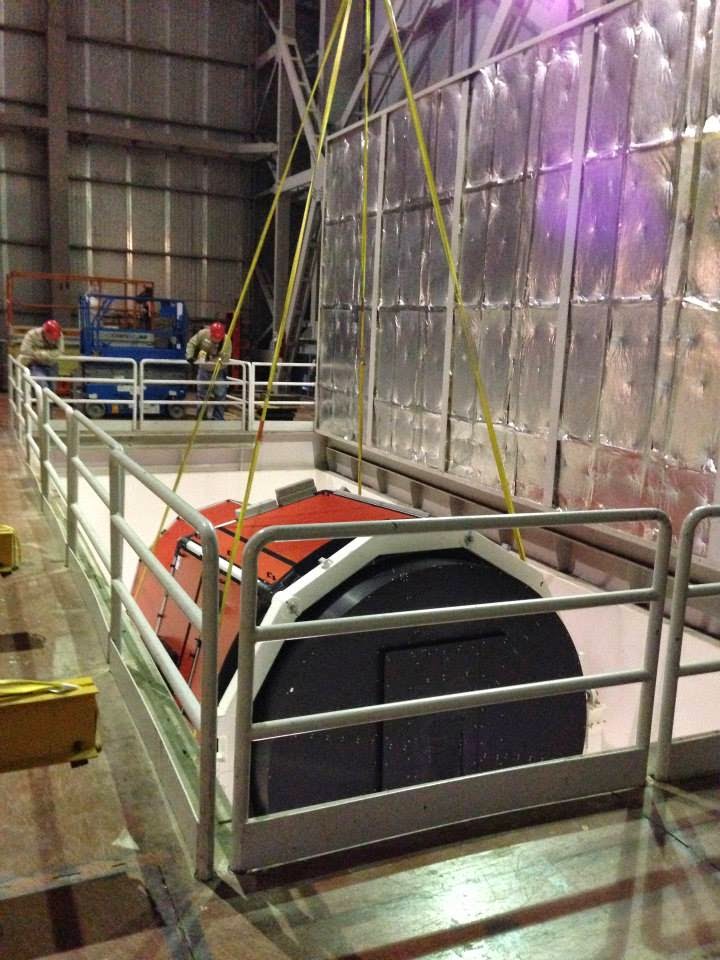 While the two LBCs (Large Binocular Cameras)  have been together for years, LUCI2 met LUCI1 on the telescope  in October of last year. LUCI2 is still in commissioning mode (not offered for science yet)

On April 9, MODS2, the second in the pair of Multi-Object Double-beam Spectrographs designed and built by OSU, joined its twin MODS1.

MODS2, which  arrived on Mt Graham in October of last year, can be seen on the right on its way up to the telescope floor. Over the coming months, MODS2 will  undergo  a series of tests, first during day time and eventually on sky for its commissioning.

The installation on the telescope went very smoothly. The picture below shows MODS1 on the left and MODS2 on the right of the telescope, each at the Direct Gregorian focus of its own 8.4-m mirror.

Posted by the LBTO broadcaster at 11:33 AM No comments: 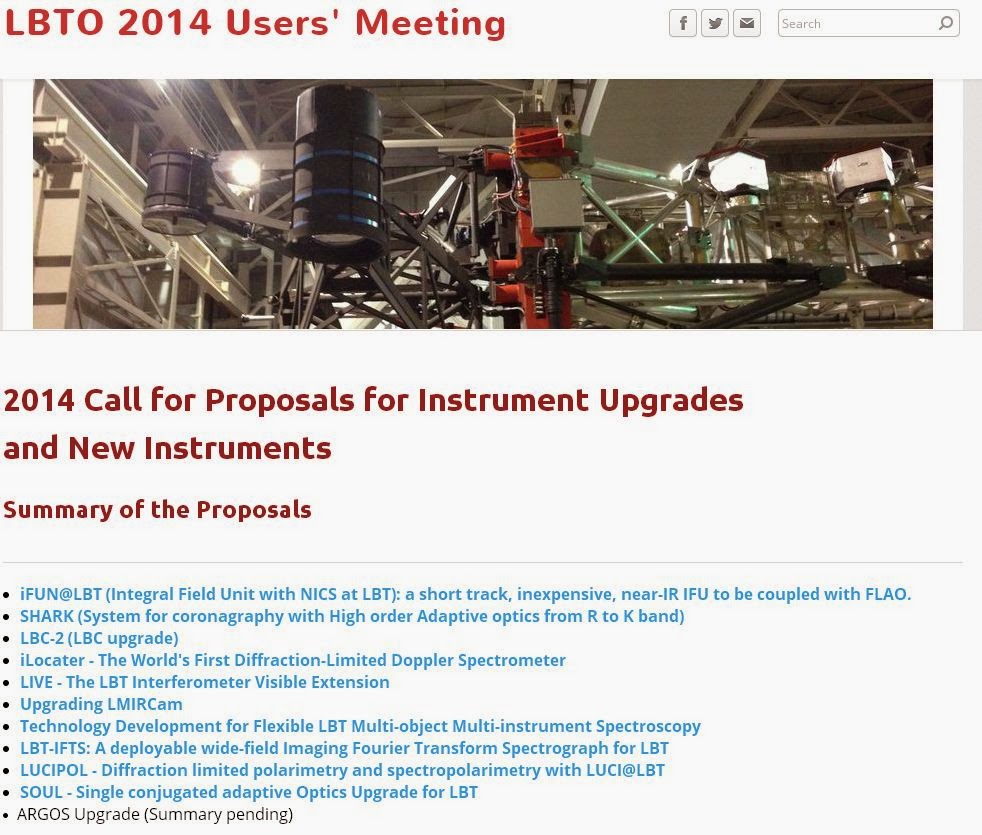 Eleven proposals have been submitted, answering the call for upgrades and new instruments at LBTO.

They go from technical studies to full fledged instruments, with many building on the exceptional performances of LBT's adaptive optics.

All the proposals will be presented at the LBTO 1st Users' Meeting to be held in Tucson on March 22-25. It is still time to register!
Posted by the LBTO broadcaster at 10:16 AM No comments:

Time is running out for new instrument proposals... 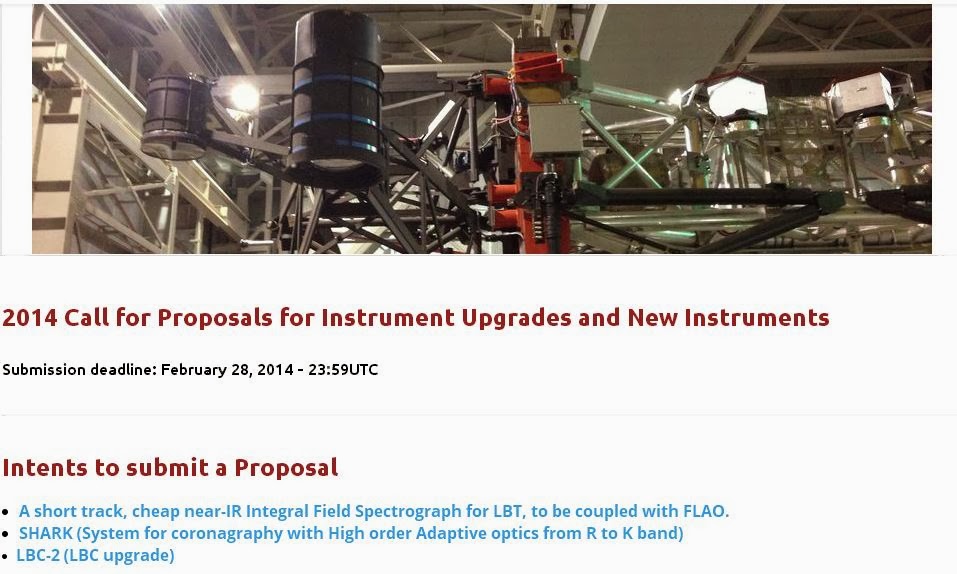 The deadline for the submission of proposals for upgrades or new instruments for the Large Binocular Telescope is approaching... Only a very few days left! Proposals should come at the latest on Feb 28 23:59UTC. All details for the submission are here.

Meanwhile, some PIs have sent their intent to submit a proposal. It is not too late to look at the short description of these proposals and to send a note to the PI if you are interested and want to join! You will find them here.

Posted by the LBTO broadcaster at 6:38 PM No comments:

The LBTO 2014 Users' Meeting preliminary program is out! 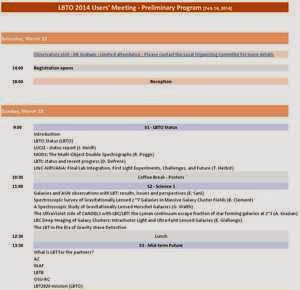 The preliminary program of the LBTO 2014 Users' Meeting is available here.

More information on the Users' Meeting is available on its website.

Do you want to give a talk at the LBTO Users' Meeting? Hurry up! Submission deadline is Jan 15. 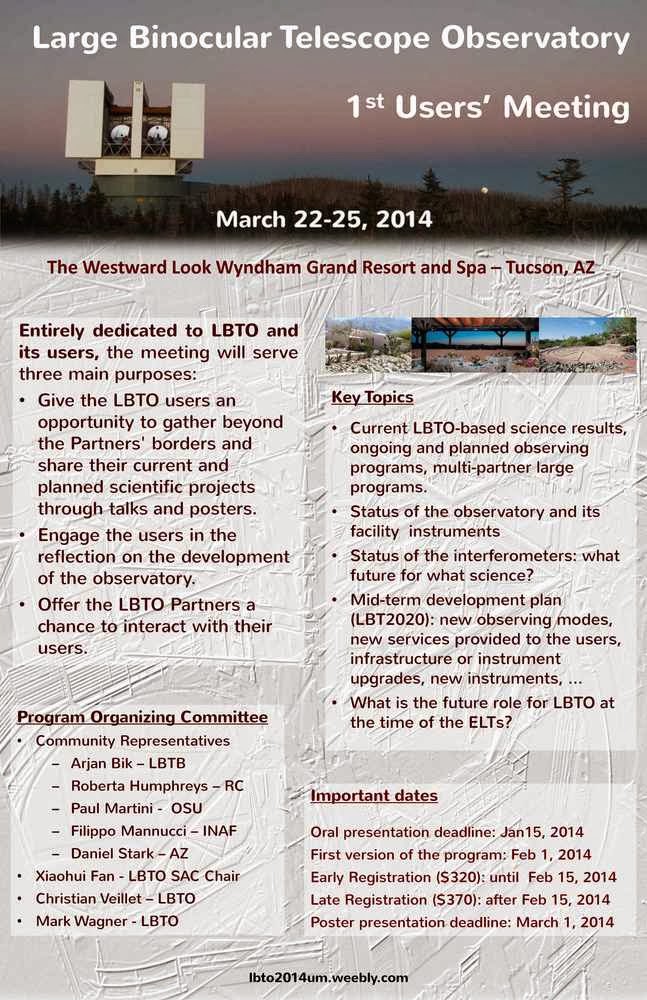 
- Is your current research using data from LBTO? Come and talk about it at the Users’ Meeting (UM) with the LBTO users’ community!  Scientific results or data-related issues (calibration, data processing) are welcome!

- Do you have ideas or projects related to instrument pipelines, archives, observing modes? The UM will be a good time to talk about them and get feedback from other users as well as from LBTO and the LBT partnership.

- If you intend to submit a proposal as an answer to the call for instrument upgrades or new instruments, don’t forget to submit an abstract on your project, as the UM is your only chance to present live your proposal to the community as well as to the LBT SAC and Board.

- If you have ideas on 2nd generation instruments for the observatory in the next decade, you better submit an abstract for the UM too, as we should start talking about them as soon as possible!

-You want to talk about something else LBT-related? Well, submit an abstract too.

Abstract Submission is one click away from the Users’ Meeting home page and does not require you to register to the UM.

Posted by the LBTO broadcaster at 9:13 PM No comments: