It is commissioning time for the diffraction limited mode of LUCI2, the near infrared imager and multi-object spectrograph which saw first light in seeing-limited mode back in November 2013.

Much work was performed during day time on the NCPA (non-common path aberrations) correction starting on January 19, 2015, to be ready for the first night of on-sky observing on January 26. Unfortunately, clouds and snow falls were followed on the 27th by yet another overcast night.

On the night of the 28th, a 2-hr gap of clear sky between waves of heavy clouds led to first light on LUCI2 in AO mode. With a seeing of about 1arcsec, the loop on the bright star HIP 15925 (6th mag) was closed the star imaged with LUCI2 and the FLAO system working with NCPA correction in HeI (1.1µm), FeII (1.6µm), and Br_gamma (2.2µm) filter bands.

The Strehl ratios achieved at first light were 45% at 1.1µm, 75% at 1.6 and 2.2µm wavelength (see a very preliminary analysis on the pictures below), a tribute to the quality of the preparatory daytime work! 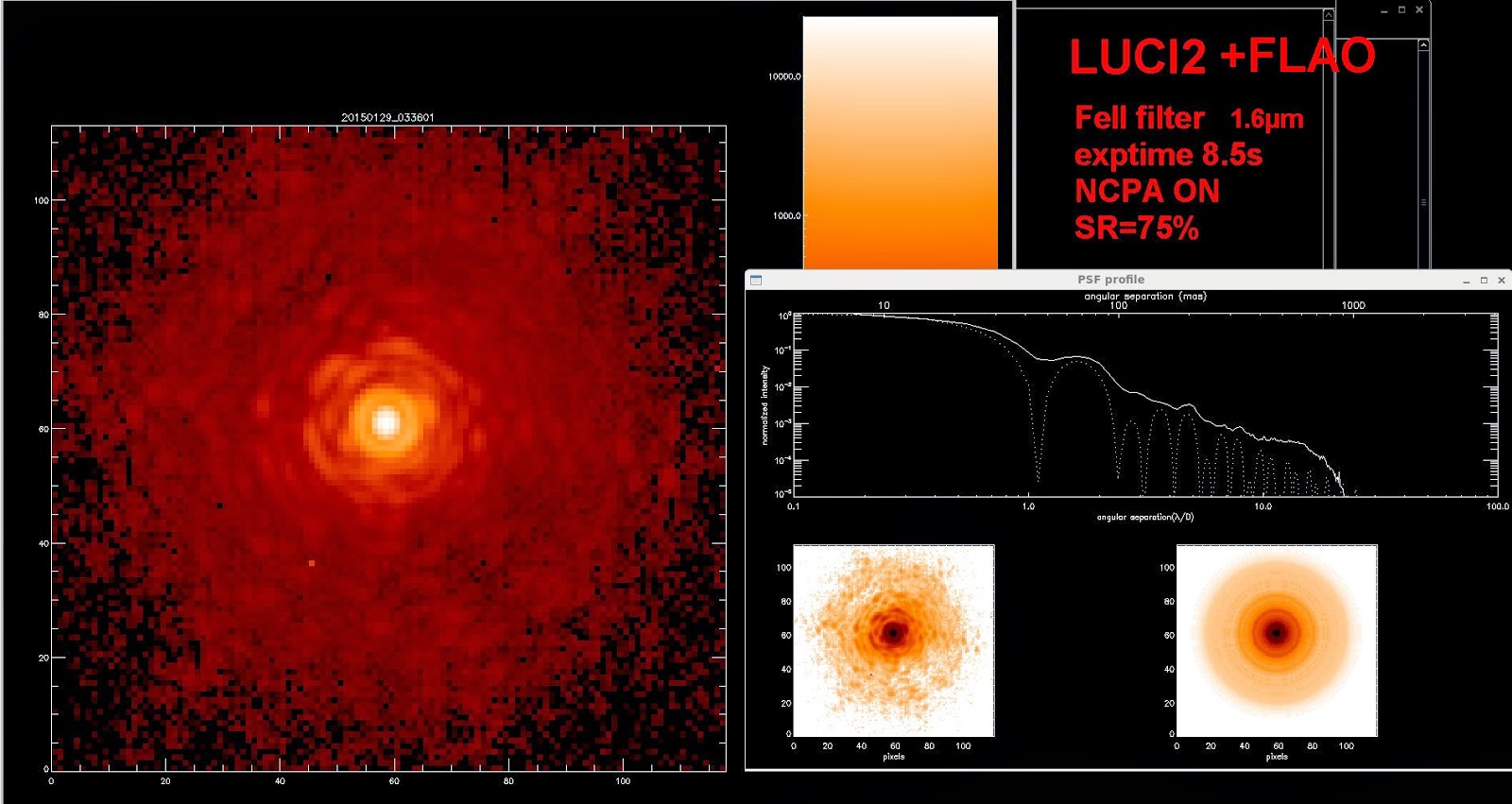 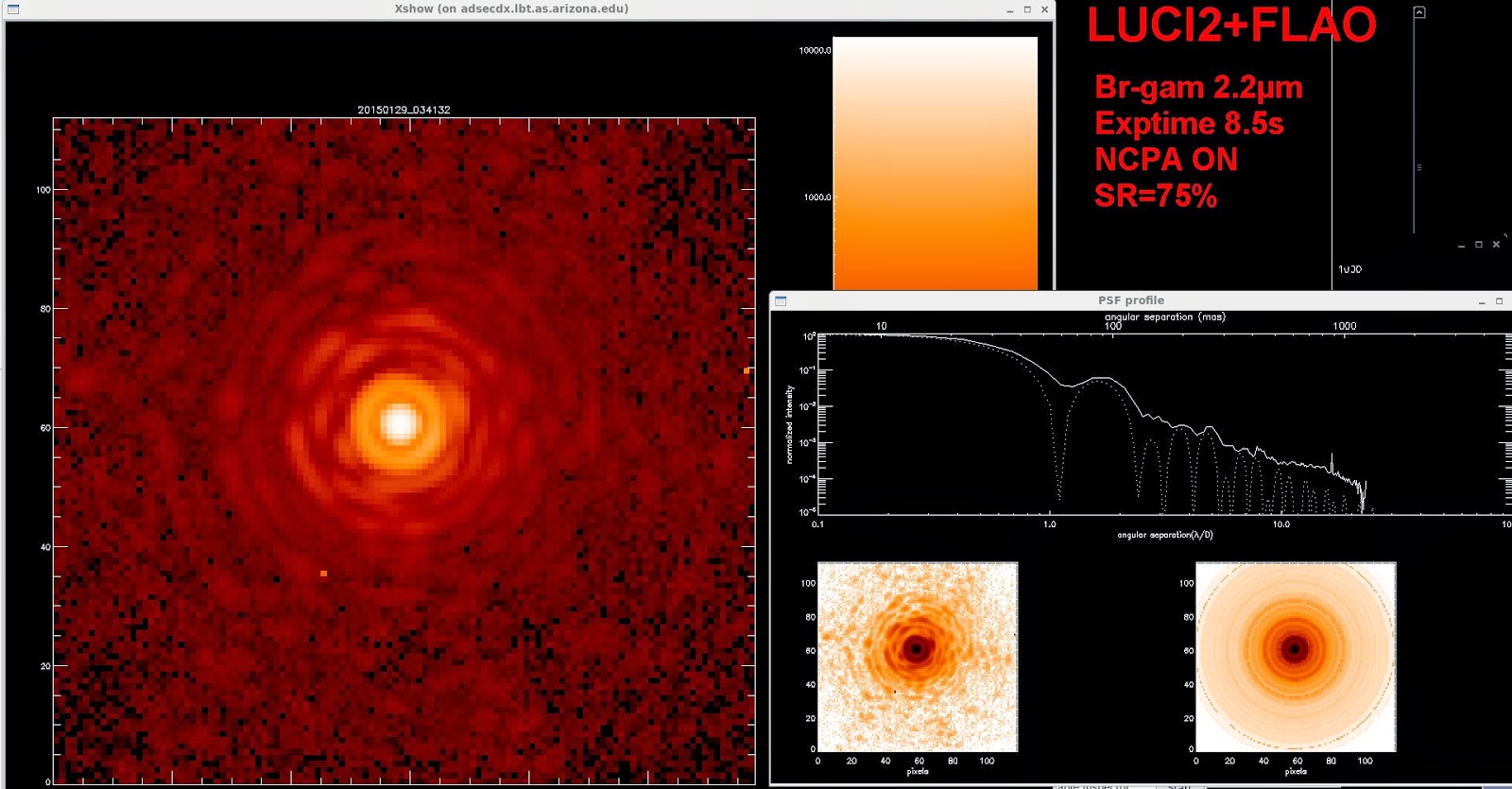 There is obviously much work ahead over the next months to get the system ready for regular observations, but these first results augur well for the final performance of LUCI2 in diffraction-limited mode, and eventually of LUCI1 once equipped with its AO-compatible camera toward the end of the year!

Posted by the LBTO broadcaster at 6:12 PM No comments:

The first designs of what became the Large Binocular Telescope (LBT) were drawn more than 25 years ago, at a time when its observing modes were also conceptually defined, enabling the spatial resolution of a 23-m telescope while providing the versatility of a pair of 8-m telescopes. An important step was recently taken with the publication of the first refereed science paper using the NASA-Headquarters funded LBT Interferometer (LBTI).

LBTI coherently combines the two LBT beams to achieve the 23-m resolution the observatory offers today as a precursor to the Extremely Large Telescopes (ELTs) currently in development and hopefully operational in the mid-to-late 2020s.

The published study reports LBTI's first test observations of stardust, in this case around a mature, sun-like star called eta Corvi known to be unusually dusty. According to the science team, this star is 10,000 times dustier than our own solar system, likely due to a recent impact between planetary bodies in its inner regions. The surplus of dust gives the telescope a good place to practice its dust-detecting skills.

The results show that the telescope works as intended: a tribute to the many who contributed to the development of the observatory.

Find more on this landmark paper in LBTO's history by reading the NASA-JPL press release entitled Telescope To Seek Dust Where Other Earths May Lie, issued on January 20, 2015.

is published in the Astrophysical Journal and available online here.

Posted by the LBTO broadcaster at 3:43 AM No comments: