ARGOS is projecting three beams per LBT's eye, creating a constellation of three artificial stars on a circle of 2' in radius. This constellation will allow a significant improvement of the image quality over the 4' field of view of the LUCIs. Each of the six Nd:YAG lasers sends a beam of green (532nm) pulses at a rate of 10kHz with a power of 14W to 18W. Three beams are launched to the sky on-axis from a mirror on the back of each of the two LBT secondary mirrors.

On the night of Nov5, 2013, the lasers were propagated on the sky for the first time. 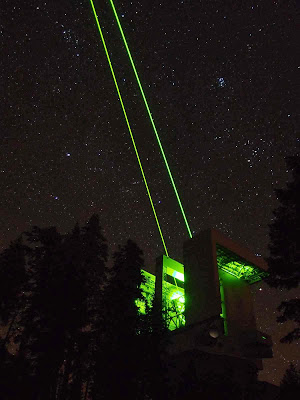 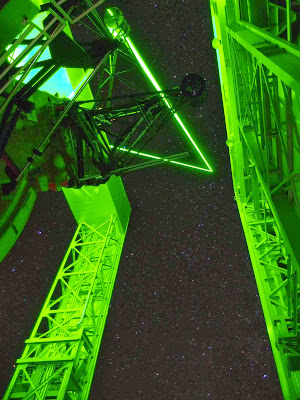 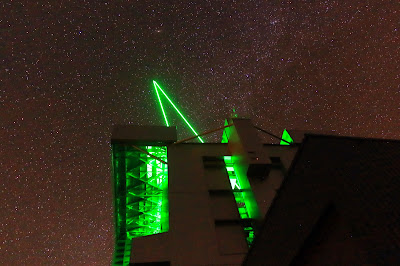 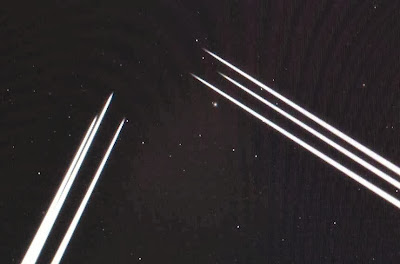 The picture above shows the first acquisition of the six beams (three per LBT main mirror) on the detector of the Mount Alignment Telescope System. For the rest of this first night and during the next three, precise alignment of the beams will be performed and checked with the elevation of the telescope down to 45 degrees, the limit under which no propagation is allowed. Focus range and brightness of the beams will be estimated and all the internal cameras of the ARGOS system will be checked out...

There is still much work left to bring ARGOS to an operational state, but tonight marks a very important step in the whole commissioning process. Following completion of this initial run on Saturday morning, the  next on-sky work is expected to continue in early spring 2014 for first light on the laser guide stars wavefront sensors...

Congratulations go to the ARGOS team for the amazing amount of work done since the Preliminary Design Review back in February 2009, and to LBTO staff for their support of ARGOS since the first hardware showed up at the telescope three years ago. Coordination with FAA and Space Command went very smoothly and the help of Safford Discovery Park docents turned plane spotters is much appreciated for these first four nights of on-sky laser propagation.

More information on the ARGOS project is available on its website here.
Posted by the LBTO broadcaster at 2:51 AM