From the Frye Fire to monsoon shutdown

The night of July 9 was the last observing night scheduled in the 17A semester. On the morning of Monday July 10, the observatory entered officially its 2017 summer shutdown. On this last night, rain came over Mt Graham, a blessing as it is bringing the Frye Fire closer to extinction.

With more rain expected in the coming days/weeks comes the danger of flood, erosion and silting damage, as well as rock and mud slides, trees blowing down, stumps breaking loose and rolling down hillsides, etc. Sludge was already on the road this morning, as seen in the picture below.


While closed to observing, LBTO managed to have much work done in two areas: tuning of the AO system, mostly on the DX side, and servicing mission of LUCI1 (W. Seifert, Landsternwarte, Heidelberg). LUCI1 went back to the telescope warm today, on schedule, after passing all its tests!

In addition, the overall maintenance of the observatory was performed by LBTO staff in spite of access issues and skeleton crews at times. An inflatable bladder was installed to secure the gap between the shutter doors and the central plenum of the enclosure to prevent leaks in case of a weather event bringing hail followed by heavy rains.

The Frye Fire started on June 7 in the Frye Canyon 4km NNE of the observatory. It started impacting observations on the night of June 14, where we had to close at 1am for smoke and ash. The following night was lost to more smoke and the fire coming closer to the site. LBTO did not open since then, ending with 25 nights in a row lost to the fire.

Only essential staff allowed to stay on the mountain. Three stay at LBTO (mountain manager, telescope operator and instrument specialist) and two for MGIO. Back burns are lit close to the observatory (north side).

A fire storm gets close to LBTO and within feet of the VATT. A walk around all of the buildings shows that they have taken some heat, but none appear to have been damaged. Power remains on...

We are able to relieve the mountain manager (Kevin down, Pat up).

MGIO water truck deliveries have been shut down after one delivery. Site running on generator.

A short visit by VATT staff of their telescope shows no damage on the telescope. A big relief!

Crew shift change and a crew of 4 at LBTO. Still waiting for a fuel delivery as the site continues to run on generator.


Swift Trail is cut by the fire in a few places. We move to low power consumption mode, but still keeping LUCI2 cold for the coming commissioning run. Unexpectedly, an escorted convoy with the fuel truck and a crew swap is organized at night, departing base camp at around 8pm! We end up with a fresh crew of 2 (mountain manager and telescope operator). 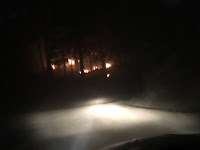 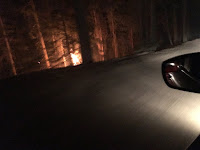 Early departure from base camp (5:30am) with W. Seifert and LBTO staff. LUCI1 servicing mission will be able to start with only a one-day delay.

Seven people are at LBTO!

More staff swap happening, including iLocater visitors to run measurements and tests in closed dome. Twelve people and much is accomplished, though no on-sky work.

First day of shutdown... Crew swap with the iLocater team leaving (happy with what they achieved) and the LUCI Aux Cryostat team coming up.


Posted by the LBTO broadcaster at 9:56 PM