LINC-NIRVANA is introduced to its new home.

LINC-NIRVANA (LN) is a near infrared imaging instrument for the Large Binocular Telescope (LBT) designed to offer both multi-conjugate adaptive optics (MCAO) and interferometric beam combination for ultra high spatial resolution. LN is a collaboration between the German and Italian partners. Its Principal Investigator is Tom Herbst (MPIA  - Max Planck Institute for Astronomy, Heidelberg). 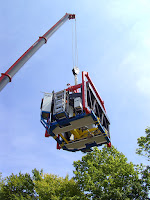 LN successfully passed its Preliminary Acceptance tests in Heidelberg (Germany) in May 2015. For the following months, the team has been very busy preparing the instrument for shipping, filling up nine 20ft containers and a BIG crate for the LN bench. Before packing the bench itself, a traverse specially built to eventually install the instrument on the LBT was tested in front of the lab at MPIA. It was LN's first flight! (see image on the right)

Bench crate and containers left MPIA in early September and arrived on schedule on Oct 20 and 21 at the MGIO base camp.

The bench crate made its way to the mountain on Oct 22, followed by a first set of four containers. They were stored in the high bay, waiting for the arrival of the LN team, eight people from MPIA who started the long reassembly process on Nov 9. The MGIO staff was instrumental in the swift and safe delivery of these heavy loads to the observatory!

Of the many steps in this reassembly process, checking the fit of the LN bench on the telescope is obviously crucial to the whole project. The bench and its traverse were reunited and they both went for a second flight...

A video of the whole operation, compiled by T. Herbst, is available on the LBTO video web page.

For a few days (Nov 16-20), the LN bench will stay on the telescope, moving around during night-time as regular observing takes place with the LBTO facility instruments. During day-time, the various platforms and covers, which will eventually be added permanently to support LN operations, will be fit-tested.

Posted by the LBTO broadcaster at 7:43 PM

Email ThisBlogThis!Share to TwitterShare to FacebookShare to Pinterest
Labels: LINC-NIRVANA