Using data from the 2.4 meter Lijiang Telescope (LJT) in Yunnan China, the 6.5-meter Multiple Mirror Telescope (MMT), and the 8.4m Large Binocular Telescope (LBT) in Arizona, USA, the 6.5m Magellan Telescope in Las Campanas Observatory, Chile, and the 8.2m Gemini North Telescope in Mauna Kea, Hawaii, USA, an international team led by Prof. Xue-Bing Wu at Peking University discovered a new quasar, with its central black hole mass of 12 billion solar masses and the luminosity of 420 trillion solar luminosity, at a distance of 12.8 billion light years from the earth. This is the brightest quasar ever discovered in the early universe, powered by the most massive black hole yet known at that time.

The discovery of this quasar, named SDSS J0100+2802, marks an important step in understanding how quasars, the most powerful objects in the universe, have evolved from the earliest epoch, only nine hundred million years after the Big Bang, close to the end of an important cosmic event that astronomers referred to as the “epoch of reionization”: the cosmic dawn when light from the earliest generations of galaxies and quasars were thought to transformed the Universe, ending the “cosmic dark ages”. This discovery is also a surprise: how can a quasar so luminous, and a black hole so massive, form so early in the history of the Universe, at an era soon after the earliest stars and galaxies have just emerged? This research result will be published in the scientific journal “Nature” on Feb 26, 2015.

Discovered in 1963, quasars are the most powerful objects beyond our Milky Way Galaxy. It shines itself as its central supermassive black hole actively accretes surrounding materials. Thanks to the power new generation of digital sky surveys, astronomers have discovered more than 200,000 quasars, ages ranging from 0.7 billion years after the Big Bang to today, with corresponding redshifts up to 7.085. Due to the expansion of the universe, objects are moving away from us. Wavelength of light received by us is larger than that of the originally emitted light. Redshift is defined as the ratio of the wavelength difference to the original wavelength.

The newly discovered quasar SDSS J0100+2802 is the one with the most massive black hole and the highest luminosity among all known distant quasars (Credits: Zhaoyu Li/Yunnan Observatory. The background photo, provided by Yunnan Observatory, shows the dome of the 2.4meter telescope and the sky over it)

High redshift traces structure and evolution of the early universe. However, despite of their high luminosity, they still appear faint due to their large distance away from us, and they are extremely rare on the sky, which make them very difficult to find. Among all the discovered 200,000 quasars, only 40 are 12.7 billion light year away with redshift higher than 6.

In recent years, a team led by Xue-Bing Wu, a professor of the Department of Astronomy, School of Physics at Peking University and the associate director of the Kavli Institute of Astronomy and Astrophysics, have developed a method to effectively select quasars with redshift higher than 5 based on optical and near-infrared photometric data, in particular, using data from the Sloan Digital Sky Survey and NASA’s Wide-Field Infrared Explorer (WISE) satellite. Then with spectroscopic observations, they have systematically discovered a large number of new high redshift quasars. SDSS J0100+2802 is one among them but has the highest redshift in their sample, and one of the most distant quasars discovered.

The first optical spectrum obtained on Dec. 29, 2013 by the 2.4m LJT, shows that it is likely a quasar with redshift higher than 6.2. Active international collaborations allowed this team to further gather data from the MMT, the LBT, the Magellan Telescope and the Gemini Telescope. By carefully analyzing these data, the team confirmed SDSS J0100+2802 as a quasar with redshift of 6.3 and estimated its intrinsic properties. At 420 trillion solar luminosity, this new quasar is 7 times brighter than the most distant quasar known (which is 13 billion years away). It harbors a black hole with mass of 12 billion solar masses, proving it to be the most luminous quasar with the most massive black hole among all the known high redshift quasars. By comparison, our own Milky Way Galaxy has a black hole with a mass of only 3 million solar masses at its center; the black hole that powers this new quasar is four thousand times heavier.

The combined optical/near-infrared spectrum of J010012802 and the fitting of the MgII line. Main panel, the black line shows the LBT optical spectrum and the red line shows the combined Magellan and Gemini near-infrared J,H,K-band spectra (from left to right, respectively). Inset, fits of the MgII line (with FWHM of 5,130 +/- 150 km/s) and surrounding Fe II emissions

“This quasar is very unique. We are so excited, when we found that there is such luminous and massive quasar only 0.9 billion years after the Big Bang. Just like the brightest lighthouse in the distant universe, its glowing light will help us to probe more about the early universe.” said Xue-Bing Wu.

“This quasar was first discovered by our 2.4 meter telescope in Lijiang, Yunnan, China.” said Feige Wang, a PhD graduate student from Peking University who participated in the selection and identification of the quasar. “It is also currently the only one quasar with redshift larger than 6 ever discovered by a 2-meter telescope in the world. We are very proud of it.”

“Discovery of this ultra-luminous quasar presents a major puzzle to the theory of black hole growth at early universe. How can supermassive black holes grow so quickly when the Universe was so young? What is the relationship between this monster black hole and its surrounding environment, including its galaxy host? This ultra-luminous quasar with a 12 billion solar mass black hole provides a unique laboratory to the study of the mass assembly and galaxy formation around the most massive black hole at early Universe.” Added Prof. Xiaohui Fan from Steward Observatory, the University of Arizona who is part of this team.

For Christian Veillet, Director of the Large Binocular Telescope Observatory (LBTO), this discovery demonstrates both the power of international collaborations and the benefit of using a variety of facilities spread throughout the world.

“This result is particularly gratifying for LBTO, which is well on its way to full nighttime operations,” said Dr. Veillet. “While in this case, the authors used two different instruments in series, MODS1 for visible light spectroscopy and LUCI1 for near-infrared imaging, LBTO will soon offer a pair of MODS and a pair of LUCIs that can be used simultaneously, effectively doubling the number of observations possible in clear skies and ultimately creating even more exciting science”.

To further unveil the nature of this remarkable quasar, and to shed light on the physical processes that led to the formation of the earliest supermassive black holes , this research team will carry out further investigations on this quasar with more international telescopes including the Hubble Space Telescope and the Chandra X-ray Telescope. 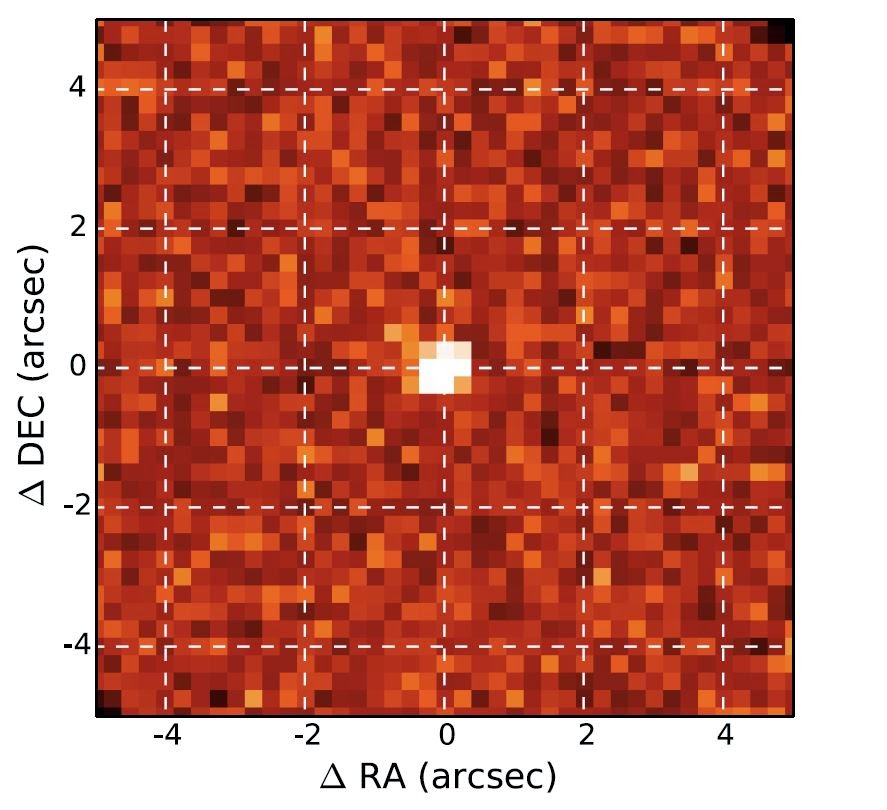 The LBT LUCI1 K-band image of J010012802. The size is 10"x10".
The horizontal and vertical axes denote the offsets in Right Ascension (RA) and in Declination (DEC).
The image, with seeing of 0.40", shows a morphology fully consistent with a point source.

Email ThisBlogThis!Share to TwitterShare to FacebookShare to Pinterest
Labels: Science