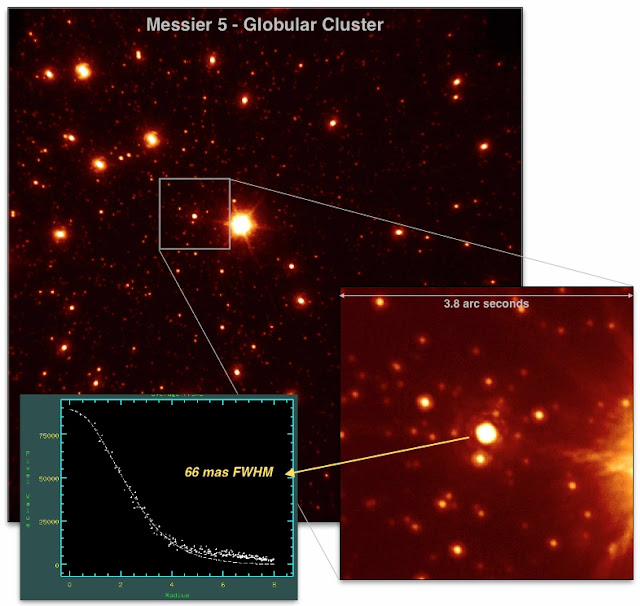 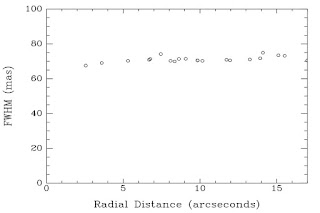 Posted by the LBTO broadcaster at 5:35 PM No comments:

Two posts were already published on ARGOS in this blog, the first one at the end of 2013 (where you will find more information on the ARGOS project) and the second one  at the end of 2014. In short, ARGOS is a Ground Layer Adaptive Optics (GLAO) system which permits correction of the image blurring seen by the telescope due to low atmospheric layers of the atmosphere. This improves the image quality by a factor of two to three over a large field (minutes of arc). ARGOS is used at the LBTO with the LUCI instruments, a pair of near-infrared imagers and Multi-Object Spectrographs (MOS).

The ARGOS team, led by Sebastian Rabien, had a very successful commissioning run this March, with five intense days of preparation work followed by five nights with mostly clear skies. Much progress was made towards bringing ARGOS closer to routine operation. The focus of this run was the left side (SX) of ARGOS using LUCI1, though some work was also done on the right side (DX).


The previous commissioning run, back in December 2015, had been a good opportunity to define and test the many steps required to conduct an ARGOS-assisted LUCI observation. This last run was an excellent opportunity to repeatedly exercise the whole process from telescope pointing and collimation, Adaptive Optics preset, laser launch, laser acquisition, guide star acquisition, loop closure, up to LUCI observations run from a LUCI script.

With low winds and good seeing, the systems turned out to run stably. To check the performance on sky, several imaging targets, were observed, from star clusters, to nearby galaxies and gravitational lenses.


Under good weather conditions, many targets show a PSF size is of around 0.2'' in Ks and around 0.3'' in J, fairly homogeneous over the LUCI field.


The team obtained, for the first time, a multi-object spectrum using LUCI with the ARGOS loop closed. While proper data reduction is pending - as for all the observations during this commissioning run - an initial look shows that nearly all of the ~33 immediately visible spectra have a spatial resolution around 0.2-0.3'', with an increased spectral resolution due to the 0.25'' slit width and the N3.75 Camera.

For a second multi-object spectroscopy test, the target was the arc of a gravitationally lensed high-z galaxy at z=2.49, combining the unique capabillities af LUCI plus ARGOS. The mask contained a curved slit matching the arc's location on sky and had a 0.5'' slit width. While being one of the most challenging applications of the LUCI MOS plus ARGOS, Halpha is detected over the whole extent of the arc with a 30-minute integration time. The clumpy structure of the arc can be seen at the 0.2-0.3''scale. 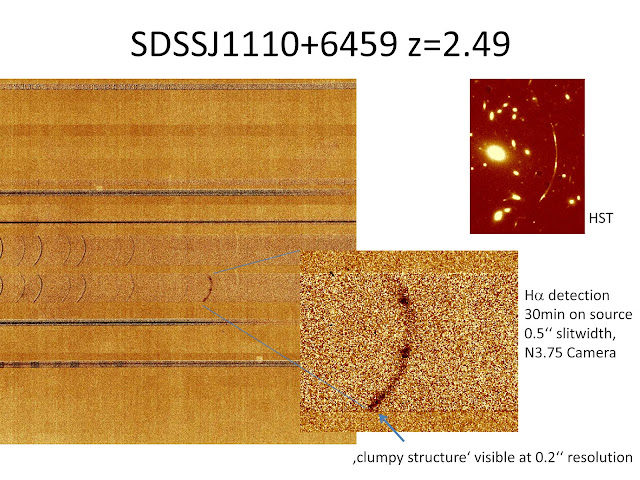 There is obviously much more work ahead to make ARGOS a reliable and solid facility instrument which will be both efficient and user friendly. The path towards a general use will be challenging, but these exciting results are definitely a great incentive (if any should be needed) for the ARGOS team, LBTO, and the LBT partnership to devote the level of resources to the project that will be required for a swift move to full operation.

Congratulations go to the ARGOS team for their great work. Many thanks to the LBTO staff for their support.

More information on the ARGOS project is available on its website here.


Posted by the LBTO broadcaster at 5:56 PM No comments: